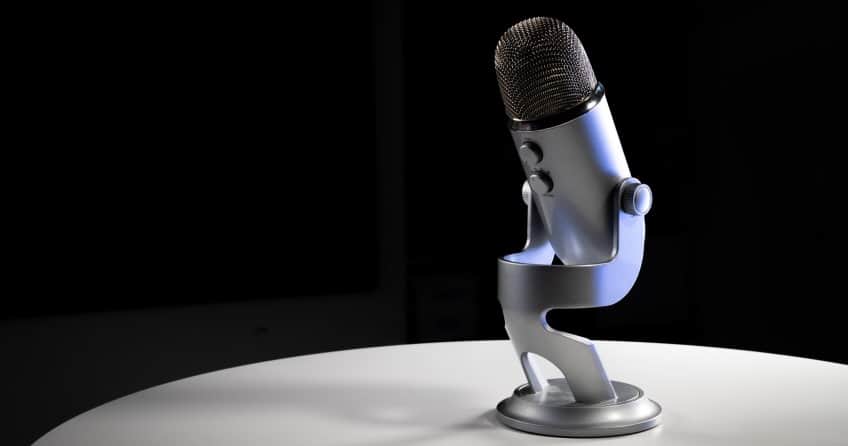 Blue has a way of coming out with new and improved products, one after the other. The USB Microphone is one of their best products. The Yeti Nano is being sold currently for around $100 which is the budget-friendly version of their Yeti mic.

There are a few striking features that differ it from its predecessor when it comes to patterns, but you will find that the cardioid pattern and omnidirectional patterns are going strong on this one.

The one that stands out is that Blue Yeti Nano lacks an onboard gain control knob which requires software adjustments. Users have not been fond of this little detail. The hike in Yeti’s price does provide you with an extra polar pattern and manual gain control.

The $100 dollars you are putting in ensures that you get a DSP (digital signal processing) alongside crisp signals that are ideal for recording music and podcasts.

The Blue Broadcast sound is amazing. Yeti Nano comes out with 2 custom mic capsules that give your voice unparalleled clarity. You can hear all the little details which make it especially incredible for music production. Get ready for some professional recording with the new Yeti Blue Nano.

You can now record vocal sounds perfectly to entertain your audiences with the Blue Vo! Ce software that provides top-notch effects, modulation, HD audio sampling and so much more. The software can be used on your Yeti, Yeti Nano, and Yeti X as well. You can access Blue Vo! Ce with the Logitech Free G Hub software.

You can now make the most of the cardioid and Omni patterns. They both provide top-notch recording, streaming, zoom meetings, gaming, podcasting, YouTube Videos and so much more. It is especially great when you have to record voiceovers.

The new Blue Yeti Nano allows you to monitor audio recording with just the precision you need using the Onboard Headphone Output and Volume Control. You can now ensure that the sound is up to par with the great in-built sound quality monitoring system

The Yeti Nano when mounted to the stand (which comes with the mic for FREE), is about 8.3 by 3.8 by 4.3 inches (HWD) and 1.4 pounds. The mic is built stylishly in metallic gold, blue and red models. The mic has a retro yet professional look. The Blue Logo is found at the front panel alongside a headphones volume knob.

The mic can be connected to the computer easily which is when the volume dials will light up green. If you press the knob it will light up red, working as a mute button.

Ideally, the capsule will be about six to ten inches away from the speaker. This is also why this mic may not be ideal for recording on your desktop stand. The USB cable can be situated neatly with the canal to thread located on the base.

At the very bottom of the mic, there is a quarter-inch thread that allows you to connect the mic to camera tripods.

There is a 0.75-inch screw-in adapter as well that can improve your connection to a standard mic stand. There is a 3.5 mm headphone jack included that allows the micro-USB cable to be included when needed.

The side-address model will ensure that you can speak easily into the grille which is above the front panel. You can also adjust the volume knob with the blue logo.

The mic has 14mm capsules, such as the cardioid and the omnidirectional patterns. These allow you to choose between the patterns ideal for recording vocals, podcasts, game streaming and so much more.

The 360-degree recording field is ideal for conference calls, recording several musicians, and speakers. You can switch between these two modes quite easily by toggling the button in the back with the LED light indicating if you have selected a pattern.

The Yeti Nano has Outputs that are 24-bit, 48kHz audio recordings with frequency responses of 20Hz to 20kHz. Just like other Blue USB microphones, the Yeti Nano will not support DSP, as it is a pro mic with an XLR connection.

The DSP may be a challenge because the mic can distort completely if the gain level balance and the placement of the microphone is off. But all professional mics work like that and not having DSP will mean sacrificing better recording capability.

How to Use Blue Yeti Nano and Blue Sherpa Software

The Blue’s Sherpa desktop app allows you to control the mic such as adjusting its gains, switching polar patterns, etc. without having to do it manually. The Yeti Nano doesn’t have a gain knob and users have been furious as to why they must download a desktop app to adjust gain levels.

The app also allows you to download and update firmware for the mic which can also not be done manually.

The Blue Yeti Nano works with Windows 7, 8.1, and 10. It works with Mac OS 10.10 or higher and will require USB 1.1, 2.0, or 3.0. The mic will work well with most recording software apps except ProTools. On the flip side, you can access the trials which are free of Xsplit software and OvrStream software with the Yeti Nano.

The Sennheiser HD 650 Open Back Professional Headphones are the best headphone you can get your hands down. We recommend using them with your Blue Yeti Nano. The headphones are compatible and allow you to hear amazing sounds with their impressive frequency responsiveness of up to 10 decibels. This is the best combo for music production.

You can use Yeti Nano almost immediately with GarageBand. There may be adjustments required for the increased levels in the software. You can also work with the default gain levels.

Most people don’t even need to make adjustments, they can use the mic as is. There is no latency delay with the Yeti Nano. you can use it as soon as it is plugged in. The Yeti Nano will provide you with real-time connectivity to your headphones.

With this mic, you can start off using the cardioid pattern which can be changed. The vocals are incredibly clear and even when recording from far away. The closer you get to the mic the clearer the sound will get.

The mic is not one with heavy bass. The clarity of sound is far more evident from the high mids and highs.

The lows are quality as well and can be adjusted to make them higher. When you switch to the omnidirectional pattern, the crispiness of the voice will be affected with a slight effect that gives the recording a better sound in the room. You can always adjust the mic to get more signals from the sides.

The Sherpa desktop app will allow you to adjust mic levels. The default gain levels are ideal because a lot of reviewers really like their recording quality. The loudspeaker and the sound source can be adjusted for effect. The app can be used alongside GarageBand for recording.

The Yeti Nano is a mic that delivers what it promises. You get a clear voice, ample signals, and a variety of effects and patterns that are great for recording and production purposes.

The default gain setting has done wonders in the recording community, but the Sherpa app allows you to adjust gain and make other modifications with just a tap. The mic is a solid bargain, as it is one of the more budget-friendly products by Blue thus far.

The Blue Yeti Nano has almost everything you need in a mic. The low-latency headphone jack monitoring is combined with the dual mic patterns. The mic is one of the most sophisticated technologies out there.

The sound and signal quality is unmatched. The mic has received some backlash as to why there are no knobs on the mic. In my opinion, it is just new tech that has its quirks that users will eventually get used to.

The Blue Yeti Nano is one of the more budget-friendly options available in the marketplace right now. You get a sophisticated mic that can be used for all kinds of recordings, and you don’t even have to break the bank. It may not be the best mic for podcasting, for that you need to look at the Blue Yeti Pro.

The Blue Yeti Nano comes with a DSP (digital signal processing) that provides clear signals and a crisp voice. This mic costs only $100 which is very low for a professional mic, but it is ideal for recording music and podcasting which costs only $100.

Q: Is the Blue Yeti Nano Good for Gaming

The Blue Yeti Nano is a budget-friendly mic, but it has high-end features. The mic is heavy which shows that it is built with metal and the finish is quite luxurious. The cardioid recording patterns make it ideal for gaming and streaming purposes due to its noise cancellation.

Q: Why is Blue Yeti Nano so Quiet

If your Blue Yeti Nano is too quiet you might want to double-check the USB connection between the microphone and computer. This may be a result of a frayed USB cord or the USB port interfering with the connection.

The cardioid and omnidirectional pickup patterns on the Yeti Nano are great for conference calls and you can easily attend a meeting in a busy coffee shop with this sound wizard. All you have to do is plug it into the USB port of your computer and it will connect automatically.

Q: Can You Use Blue Yeti Nano With a Laptop

The Yeti Nano is quite simple to use and set up. All you have to do is plug the mic into the USB port of your Mac or PC and start recording.

Q: Can you use a Blue Yeti without headphones?

Q: How do I stop my Blue Yeti from picking up my keyboard?

There are several ways you can avoid the typing sound to be picked up by your Blue Yeti Nano. We recommend using the cardioid pattern for recording. You can speak into the side of the Yeti instead of the top. This will minimize the typing sound. By placing the keyboard behind the mic you can ensure that sounds are not picked up. You can record up to 4 to 10 inches away from the mic to dampen the mechanical transmission.